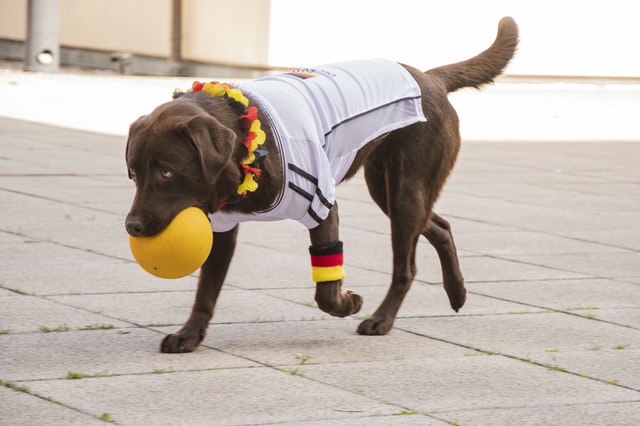 ​Have you ever asked yourself why do the dogs play with their food? They do play with their food because of factors such as boredom, habit or even lack of exercise. They also do so out of enjoyment because many dogs are playful in nature. Apart from playing with their food, dogs have a funny habit of roll their food before eating during meal times. Read this article to get a wonderful insight into this behavior.

​Causes of this behavior

They play with their food as a way of doing an exercise. Dogs needs a lot of exercise to keep them fit and to get rid of excess energy in their bodies. Apparently, they don’t exercise all the times. This leaves them with lots of energy which they use to play with the food instead of eating. Apart from playing with their food, they also have some strange character of rolling in their food before eating. They do this because they are defensive of their own resources. This is the reason as to why they leave their marks on their food so others would not consume it.

​How to deter this behavior

If you are not happy with this behavior, can it be deterred? Is it really worth to prevent this behavior on the dogs? Probably it would be a good idea to make a dog healthy. It can be prevented by: Giving the dog a daily training exercise. This will lead to burning up of the excess energy in them. In turn, the dog would concentrate on eating properly during mealtimes. The result would be a healthy happy dog.

Apart from the dog owners discouraging the behavior, on the other hand it would be good to encourage. A playful dog is a happy dog. However, there is need to keep the limits so that the dog doesn’t play away with the food. What are the positive attributes of letting the dog play with their food? It keeps the dog sharp and effective. By playing, the dogs learn how to hunt and defend themselves. It keeps the dog healthy. The dog uses up the excess energy that it produces to play with the food. The dog becomes productive, that is it becomes so useful to the owner. An entertained dog will be the pride of the owner.

It helps to ease the boredom that the dog undergoes. When it does not have the time to play, it becomes so boring for the dog. This might affect the health of the dog. It is worth noting that not all the dog owners have time to play with their dogs. It would therefore be a wise idea to let the dogs play on their own. This includes playing with their food.

​In conclusion, I hope that as a matter of fact, there are merits and demerits of the above behavior. Should the dog play with its food or not? You should be able to deduce from the text. Which will prove helpful to you.

​Nevertheless, you can consider our ​best canned puppy food